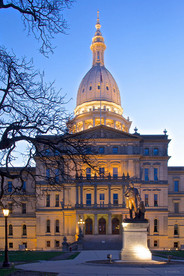 In September 2018, Michigan legislators passed two initiatives that put employers on the edge of their seat. Suddenly, there were two new mandates for job providers to grapple with. One, an increase to the state’s minimum wage to $15 per hour that also removed the tip earner wage. The second, a mandate for all employers to provide at least 40 hours of paid sick leave to all employees – full-time, part-time, interns, etc.

A series of significant changes to both proposals were enacted in December during the lame duck session of the Michigan Legislature.  The Chamber partners in the Northern Michigan Chamber Alliance strongly urged lawmakers to consider a series of amendments that were more palatable for small business owners in rural Michigan. The Chamber also supported the efforts of statewide business organizations like the Michigan Chamber and SBAM in making general changes that were good for businesses and employers across the state.

Those efforts were successful, and below is a recap and information on the changes and timelines that employers should know.

Need To Know: Read the Analysis
Legislators approved massive changes to the very punitive initiative language that was passed in September, including most of the Chamber Alliance’s suggested changes. Perhaps the most significant change was amending the mandate for all employers and going instead with companies employing over 50 people – meaning all small businesses and employers less than 50 will no longer be subject to the mandate.

Need To Know: Read the Analysis
The legislature slowed the increase from $10.00 to $9.45 per hour in 2019, increasing incrementally to $12.05 per hour by 2030. Lawmakers also reinstated the special wage for tip earners (up to $4.58 by 2030) that restaurant owners and restaurant service workers alike were clamoring for. They believed that getting rid of the special wage would have a chilling effect on the amount of tips servers would bring in from restaurant patrons. Most of the time, when tips are included, servers make well above even the proposed $15 minimum wage.

What Does The Future Hold?
The saga may not be over, however. In January, organizers announced they would relaunch the ballot initiatives with the goal of putting them on the 2020 statewide ballot. Organizers believe new Michigan Governor Gretchen Whitmer will veto any future attempts at the legislature to amend the initiative language should the ballot proposal become law. While successful in these attempts to soften the blow for northern Michigan employers, this is a topic the Alliance will continue to follow.

← Alliance Moves Lame Duck Priorities
Where Did We Provide The Most Value In 2018? →