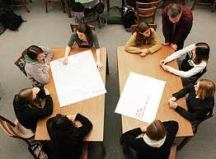 An Agreement was reached on school funding that will be finalized this week and sent to the Governor.  Senator Howard Walker, Chair of the Senate Education Appropriations Subcommittee, held his ground and helped create movement in closing the funding equity gap.   While this is a small victory for the lowest funded schools in our region, we will be keeping this top of mind for the Governor in late 2012 as he plans for his 2013-14 budget.  Please take a moment to Thank our Northern Michigan Delegation  of State Senators and State Representatives for supporting additional funding for our schools.

Districts that meet 7 of the 8 “best practices” identified by the legislature will receive approximately $52 per student.

Districts that meet the criteria for student performance, based on data from 2010-2011, can receive up to $20 per student.

Districts can apply on a competitive basis for funding to implement technology infrastructure in support of online, adaptive testing, or the funding can be used to purchase the online adaptive testing.

$155 million will be put toward the funding of the School Employees Retirement System. This amounts to about $100 per student. This is considered “one time funding” and may not be continued into future budgets.